I feel as if I have just finished a marathon … and I didn’t come last!

Nine and a half years ago, with a garden completely established and irrigation system in perfect condition, we acquired two puppies. Over the next few years, the irrigation system stretching over half an acre of garden, slowly gave up the ghost as very young and sharp teeth found rubbery chew rings in the garden. Last year, as you may remember, I said goodbye to one of those two puppies and the other one stopped chewing the pipes a while ago.

Last year I instructed a man to resurrect the system but unfortunately, he was/is not a well man and gave up on the job about 60% through. Since summer is about to start hammering us again, I thought it was time to give me space so as not to hand-water the entire garden, obviously using mobile sprinklers, etc. – a time-consuming exercise! The guys from Green Forest are just packing up and it’s all done … the finish line has been reached: IT WORKS! Phew!!

In the last post but one I was talking about my ‘new’ studio. Well, since then quite a lot has changed and I now have a ‘proper new’ studio. It started out as this

Slowly transformed into this

First a jigsaw puzzle to put together …

… which became this – storage space! 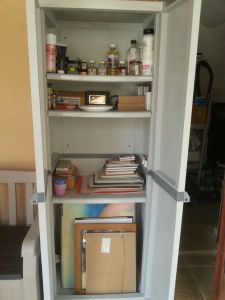 It used to be the kitchen patio where everything was parked – until later – then gathered dust and dirt and eventually had to be turfed out as having passed its sell-by date. The sliding doors (double-glazed) I salvaged from a neighbour at a fraction of the price it would have cost new. Expert carpenter and builders installed them and at the same time, installed a shower in the downstairs guest loo, effectively giving me a three-bedroomed house instead of just 2 bedrooms. 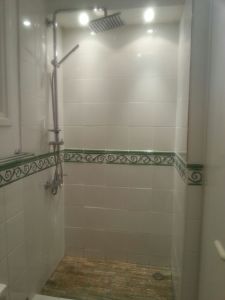 What used to be my studio is now being transformed into study/den/chill room where an extra guest may sleep. As I also want to use it as a sort of small gallery, a few more pictures need to go up on the wall, paper and things sorted out and a mattress for the bed to be bought … and, viola!

I’m quite chuffed with it all and feel so good about it that I have decided to launch an Open Studios weekend with my website, http://www.art-en-route-cyprus.com as the host. This morning, the process began … watch this space for more on this.

This morning, as a ‘test drive’ I finished off a painting in my new studio and it really felt good to work there. Here it is … 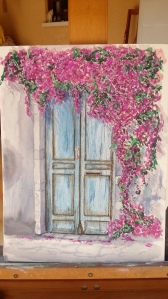 A few hanging baskets with colourful flowers will just finish it all off beautifully. Slowly but surely, the area will be transformed into a little oasis so that I may host my own open studio in that space and play host to a few more artists to display their work on the pool patio, here 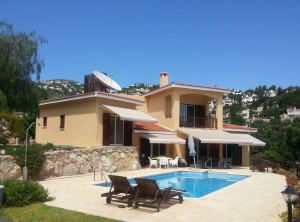 Oh, I have also decided to name my villa now : 7 Levels – it is located on 7 levels of garden, I believe there are 7 levels of consciousness, there are 7 chakras and 7 is also a lucky number … A wrought iron-type name will be made soon and that will go up on my garden wall on the outside so that it cannot be missed!

Looking forward to September! The week after the Open Studios, I shall be hopping over to Italy for a week’s painting holiday in Tuscany … pure bliss!